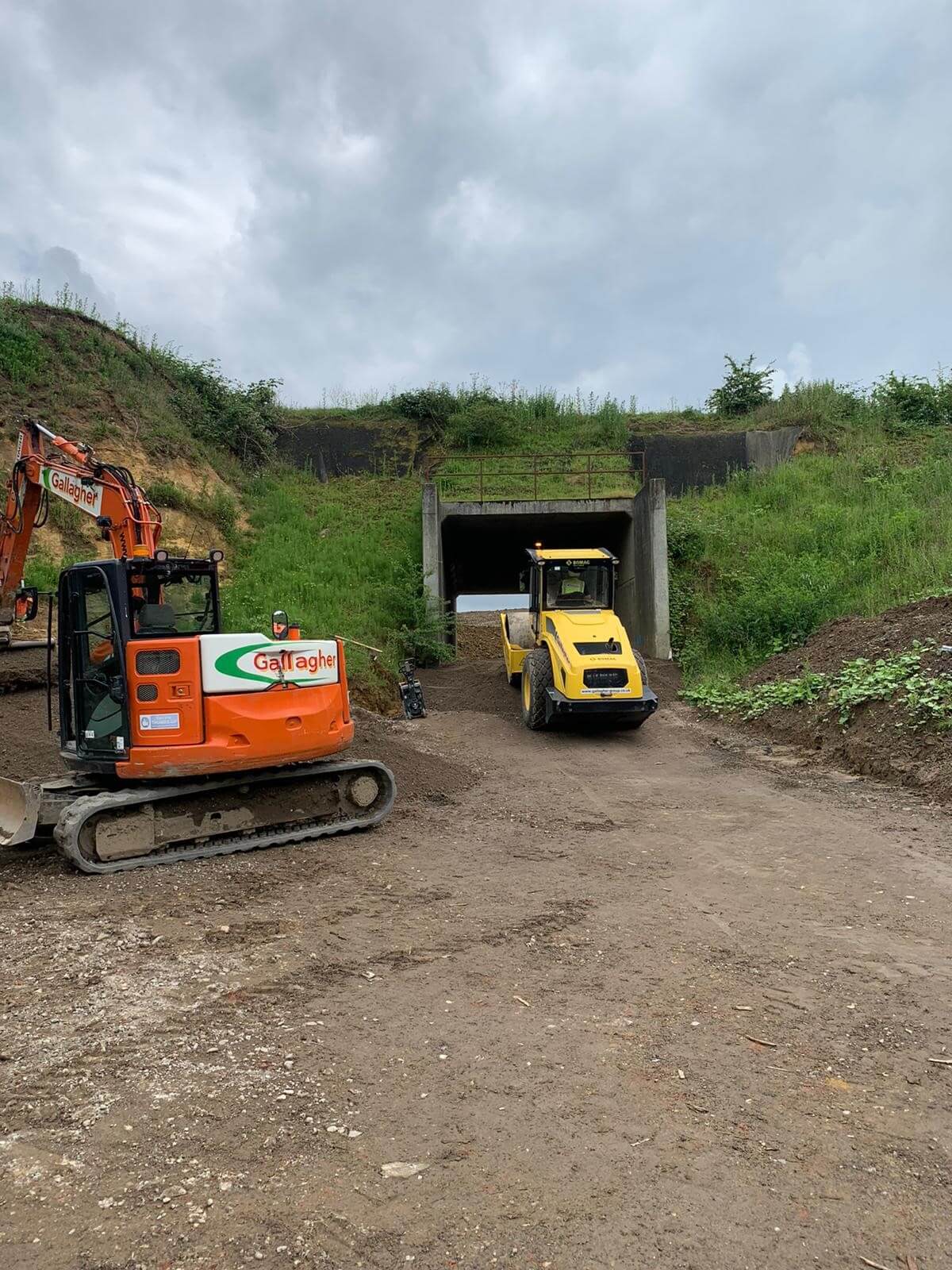 Closure of our tunnel

Infilling our Tunnel at our Betchworth Quarry

Work has just finished on infilling our tunnel at our Betchworth site.

The Tunnel was used for 9 years and enabled access into the Common Field as an extension to the Betchworth Quarry. The additional field released over 700,000 tonnes of building sand and took over 50,000 lorry loads of inert waste to backfill the void to original levels.

The infilling of the tunnel had to be completed using pumped concrete, and the work was again completed by our “friends” The Gallagher Group from Maidstone in Kent.

The final placing of the soils on the Common Field is currently underway. 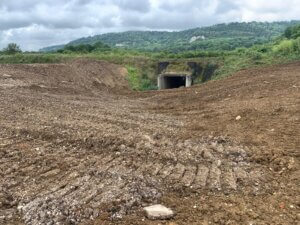 History of the tunnel

In November 2011, The Gallagher Group from Maidstone in Kent, constructed a new accessway to join the two parts of J & J Franks’ Betchworth Quarry. This was fundamental to us, as it allowed us to continue operating our quarry activities and provided continued employment for our skilled work force.

The existing sand quarry with permitted landfill was located on both sides of the Old Reigate Road in Betchworth, Surrey.

Gallagher was awarded the contract for the construction of a cut and cover tunnel, and works were undertaken over a two month period. A diversion was set up to allow pedestrians and motorists to access the villages either side of the accessway.

The excavation was carried out in two stages. The first involved excavating around the existing statutory services (BT, UKPN – LV + HV and gas) which added to the challenges of the job. Ladder beams were used to span over the 16.00m excavation, with some services supported in split ducts and ratchet straps and the BT ducts using trunking and threaded rods. The existing water main was cut out and capped by the water company prior to the works starting. The ground was excavated to formation level and concrete base cast. The precast units were lifted into position by ABM Precast under a contract lift (the crane mat was previously prepared by Gallagher Ltd). The reinforcement and insitu concrete slab was prepared and concreted followed by backfilling to the underside of the road. Water proofing and mastic works to inside/outside of units were undertaken as the backfill was carried out. The sub-base stone, kerbing and tarmac to the road were laid along with topsoil works to the quarry banks and the erection of fencing. Finally, a tarmac strip was run through the tunnel.

What our customers are say

Im not one to make a post, but just had to say JJ Franks from beginning to end was a really smooth service and the delivery driver was amazingly courteous, and helpful. Well done JJ Franks and congrats on a great service.

Extremely efficient service at delivery and collection. Driver expertly negotiated a tricky entrance and drop off with great skill and courtesy!

Skip arrived when expected . The driver was very careful and considerate when placing the skip onto my driveway and was collected at my convenience. Will definitely be hiring a skip again!

Great to work with, friendly staff on hand to help. An overall reliable service!

Great communication, deliveries and pickups were always on time and they sorted out a load of grief I was getting from the Council about skip placement too. Brilliant.

Fantastic service, would definitely use them again.

Efficient, prompt and the best price.

Book Skip Hire
We use cookies on our website to give you the most relevant experience by remembering your preferences and repeat visits. By clicking “Accept”, you consent to the use of ALL the cookies. However you may visit Cookie Settings to provide a controlled consent.
Read MoreCookie settings
REJECTACCEPT
Manage consent

This website uses cookies to improve your experience while you navigate through the website. Out of these cookies, the cookies that are categorized as necessary are stored on your browser as they are essential for the working of basic functionalities of the website. We also use third-party cookies that help us analyze and understand how you use this website. These cookies will be stored in your browser only with your consent. You also have the option to opt-out of these cookies. But opting out of some of these cookies may have an effect on your browsing experience.
Necessary Always Enabled
Necessary cookies are absolutely essential for the website to function properly. These cookies ensure basic functionalities and security features of the website, anonymously.
Functional
Functional cookies help to perform certain functionalities like sharing the content of the website on social media platforms, collect feedbacks, and other third-party features.
Performance
Performance cookies are used to understand and analyze the key performance indexes of the website which helps in delivering a better user experience for the visitors.
Analytics
Analytical cookies are used to understand how visitors interact with the website. These cookies help provide information on metrics the number of visitors, bounce rate, traffic source, etc.
Advertisement
Advertisement cookies are used to provide visitors with relevant ads and marketing campaigns. These cookies track visitors across websites and collect information to provide customized ads.
Others
Other uncategorized cookies are those that are being analyzed and have not been classified into a category as yet.
Save & Accept
Powered by